I hope you all spent a nice Christmas!
I did. It was a little different to the years before because there have been some changes in my family. But still, I had a pleasant evening.

Before, I have been terribly busy making presents, present boxes and so on. Unfortunately I forgot to take pictures of all of the stuff. :( But I managed to do some scans. First, I would like to show you this image (even though it's chronologically the newest): 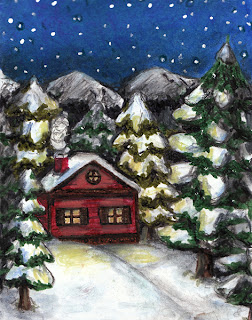 I drew the sketch when I visited my Granny at the 24th and coloured it today. A while ago my friend Verena got me a marker sketchbook. As I use copic markers very often I thought this might come in handy - in case I want to add a little colour to a sketch.
So this was the first time I used my copics with this sketchbook and they did weeeird things! o.Ó I normally use the official copic paper and there is hardly any blending effect. Those who use copic markers might know that there is a special tool for that purpose, the copic blender. It's a colourless pen you would use to blend colours, but in reality this hardly works. What works quite good is applying alcohol (from a drugstore) with a soft brush and then gently blending the colours with it.
Anyway, on this paper the colours just blended themselves! I guess it's a feature, not a bug :D But at first this caused some smudges, of course. I just didn't expect them react like that...

So afterwards I experimentalized a little: 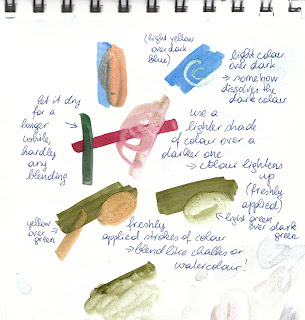 I will try some more effects in the future. They are smudging like pastell chalks or something. What a range of new possibilities! :D And this makes me brood over the quality of actual copic paper... ~~

I also did some crafting last week, but I have no pictures and I already gave those things away for Christmas :O But here is a little picture I did for my dear Mika's birthday: 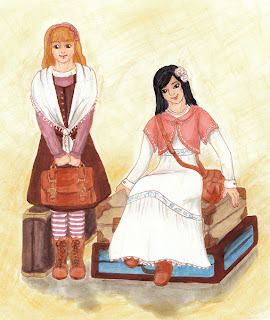 We both love Mori Girl style and to travel together. So I drew us with some suitcases. :D I had to hurry, so it's not flawless. I hope she likes it anyway.

And here are some bookmarks I made as Christmas presents for friends. They let me scan them the day after :) Again, I had very little time, so there are a lot of mistakes I'd like to fix. Hrm >_>

This one was done for Lara. We are both fans of the Professor Layton games. I've been wanting to draw some Layton fanart ever since and I thought this would also make a good present for her.

This one was for Nick, who told me he's fond of Phai from Skyward Sword... Nah, I will refrain from any further comments xD

And then there are two more, they are designed to go match each other and feature the dogs of Lisa und Julien ;)

If you ever looked through my DA gallery, the second one might seem familiar to you. It's a miniature image of a picture I did a while ago.^^ All the bookmarks were all drawn with copics and chalks, then glued to some coloured carton, cut and laminated. I was in a hurry, so I laminated some at once, which was a bloody mistake... of course they got out of place and one was laminated over the other, so of the Black Labrador Retriever bookmark, only the upper part was spared. My gorgeous boyfriend was patient enough to help me restore it digitally. (In the end it would have gone faster if I drew it again, but well xD.) The plan was to print it out and laminate it again and hand the repaired one to Julien. It looked ok on the screen, but the printout was horrible. This lead to various attempts xD 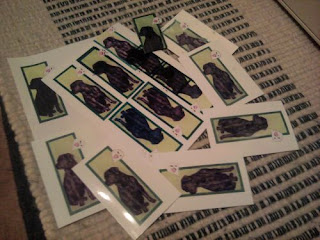 The major problems with all of the bookmarks was that both the foil from the lamination process and the scanner added a grainy texture to the pictures (and seized most of the colours and contrast >_>). And it looked even worse on a re-print. In the end we found a version that's looking okay: the one I featured above.
I just lacked time, otherwise I would have scanned them before the lamination. :(

Anyway... once again I realized how productive I can be in very little time! I just really need to focus on what I do and restrain from procrastination and wasting my time doing stupid things. xD (This applies to studying as well... *coughcough*...