I'm a bit late with my weekly update, forgive me. Today was the first university day after the holidays. I slept until 1pm xD I wonder what's wrong with me, recently I could sleep all day long!
My other Monday classes are already over, so I only have an evening class then from now on. :)

I often feel the urge to write a new entry, but I still don't have a new scanner and this decelerates me D: You know, whenever I come home from an exhibition, the cinema or whatever, I'd want to doodle a related picture and blog it right away, but I can't. And when I do my weekly scan sessions at my bf's place I sort most of the stuff out, because I feel like it's not up to date anymore... :( I need a scanner, dammit!!! I think I'll go and buy one really soon.

This week I've been mostly sketching and I don't think any of this is worth being shared here. I only did really quick, shabby scraps. ^^' I was busy with university stuff and helping my Granny, who is moving from her old flat.

But enough of these excuses. I made some New Year's Resolutions! I never do, but this time I feel that I have to set some rules for myself...

Apart from those scraps I've been doing something I wanted to do for a long time: The Before and After Meme from Deviantart. The picture I chose is the first one I really tried to make look good. I was fourteen and at that time, I seriously started to get interested in drawing. (Too bad I lost interest again at the age of sixteen or so... I took it up quite late again >_>).

The 2002 picture was done with coloured pencils. I was really proud back then xD 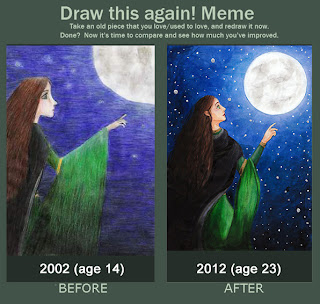 The 2012 picture was done with markers and chalks, like most of my recent pictures.I did the sketch quite a while ago, actually. When I saw Black Cat posting the meme in her blog it reminded me of my own picture again. ;) I coloured it yesterday. Well, I think I did improve, but somehow I don't like the new one^^'. It's probably because I find the motif a little boring and it's nothing I would draw nowadays.. but for the new version I tried not to change too much to allow an accurate comparision. Except for the moon... I just didn't like the picture constellation with it cut into a quarter. Forced myself to keep the rest as it is :S
Here is a bigger version of the new one if you'd like to take a look: 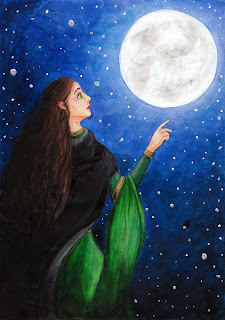 I like this meme a lot and I will do this again with other pictures. Hopefully I will be really satisfied with the other new versions then. This one leaves me a little discontent.

Onto the next drawing week!

Email ThisBlogThis!Share to TwitterShare to FacebookShare to Pinterest
Labels: Meme