Recently I've been drawing a lot. I feel like an art machine >D Remember my New Year's resolutions? I said that I'd want to draw for at least a few minutes every day. I skipped some days in the beginning, but now I'm really into it. Filled quite a few sketchbook pages lately :)

Only two new pictures for now, though. I try to leave my computer turned off and focus on studying and drawing, so I'm a bit slow with scanning and editing. ^^'

Here's just one of my recent sketches. I went to see the Dreigroschenoper (Three Penny Opera) by Brecht at the Volkstheater in Vienna and did this in bed when I got home. ^^ It's Macheith and Polly Peachum, visually based on their appearance in the version I saw. 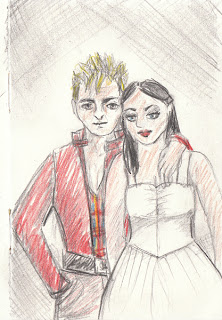 I always feel a little embarassed showing my sketches, because they usually look kinda grotty xD I put a lot of effort in every picture to make it look good. (That's why I sometimes wonder if I got any talent at all, or if it's just practice that brought me a little forward...) I really envy those people who draw some quick strokes and everyone goes "Wow!" ;) I wanted to feature this sketch anyhow, because some of the people who saw the play with me are probably reading this. :D

On Valentine's Day I felt like doing something romantic ;) And I haven't done any fanart for a while, so I killed two birds with one stone by drawing a game couple I like. :D Emil Castagnier and Marta Lualdi from Tales of Symphonia  - Dawn of the New World.

Here's a WIP pic. He's still a pencil sketch, while she's a lineart ready for colouring. Thought that this contrast looks funny.

Coloured it with watercolours and pastells: Didn't turn out as I've wanted, but I think it looks okay... If I could change one thing I'd draw her head once more xD I also tried out salt effects in the background, but there's hardly any visible result. :L

By the way, I'm preparing the first drawing books feature. Will probably upload it tomorrow!^^ And some more drawings, if I get to scan them...