Hello there. Yes, it's been exactly one month without update. I don't want to talk myself out of it, but I think you will all agree when I say, that sometimes real life's just more important than writing a blog... A lot of things happened in the past weeks, mostly bad things. And those happenings cost me most of my energy. I don't want to go into detail about this.
But I recovered a little and I think it would do me good to take this blog up again and fill it with scribbles and drawings. I drew a little less, but I do have something to post. There you go! :) 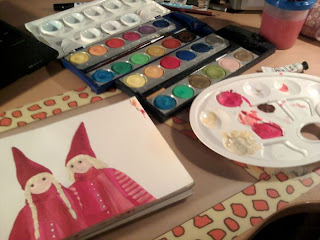 I used my copic markers very seldom, seems like I'm having a watercolour phase again :D 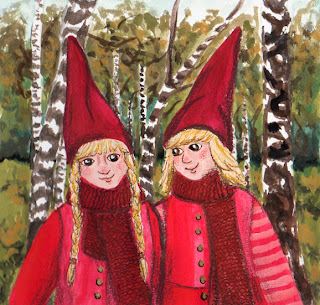 Watercolours can be really tricky, and with the next picture it all went wrong somehow xD I was in a hurry, so I did not wait for every area to be dry and painted over it... so of course the colours blended inadvertently.. I gave my friend Lea a mermaid book for her Birthday and wanted to make a personal bookmark. So when you put the mermaid between the pages, the tail is supposed to be sticking out ;) It has a front and back side! But not only the colours merged in a way they should't have, the pouch laminator ate it up >_> It was totally screwed and I was really embarassed to give it to Lea like that.
In the end we met like two weeks later than planned and I would have got enough time to paint it again >_> But well, ...
the version you see here was slightly edited on the computer. (Removed the major flaws...) I like the tail a lot, but something about the rest is irking me :L Constructive critizism is very welcome! 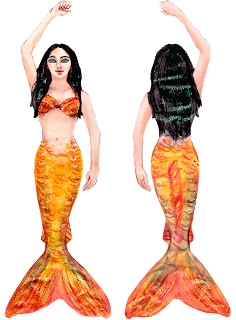 After that I decided to go to the library and borough some art books. That has been on my to-do-list for a while! I was especially interested in watercolour books and I found one that was incredibly helpful. I went home with a pile of interesing books and have read half of it by now. This gave me the idea of also posting reviews on art and drawing instruction books on this blog! :) This might not only be interesting for you, but it's also helpful for me as to create an overview of which of the books I read were really helpful. Watch out for that :D

Back to watercolour exercises... I really want to loosen up a bit when painting with watercolours. I tend to be too rigid, but I think watercolour looks best when painted with loose, but deliberate strokes. That's what I'm training on right now. I also learned some more about auxiliary material: I bought some masking fluid and real watercolour paper. When I wanted to buy a fan brush I was put off by the extremely high prices... I turned around the leave the store and then I suddenly spotted a table with sale objects, where I found this: 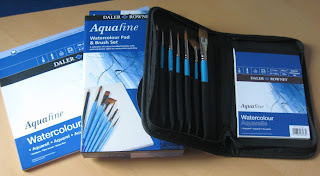 A wallet with a pencil, several brushes (including a fan brush!), and a little pad of watercolour paper. And still, the whole thing was much cheaper than the single fan brush I saw, and yet, it's brand! :D
(Yes, I know it's because of the brush hair quality. But I have brushes of different qualities and I feel that it does not matter that much if you use real hair or artificial hair ones as long as they are generally well crafted.)
Whenever I get new art materials I am totally motivated to use them right away. So I did, trying to make use of my new material and skills.^^ 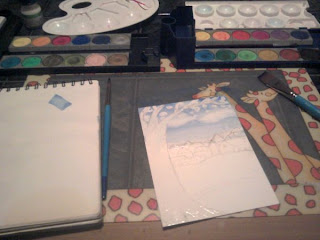 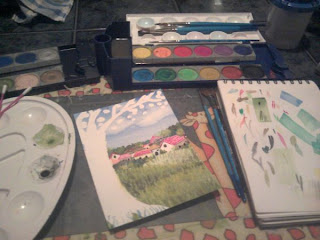 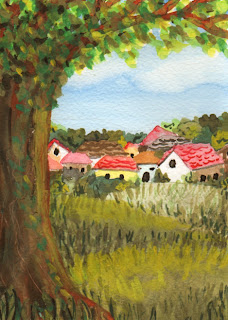 And here's comes a sketchbook scan from today. Maybe you know how much I love to pluck flowers or plants and paint them at home - I posted such nature studies before. At the moment the variety of such is scarce, of course. ^^' But when I took the dog for a walk in the forest I managed to put an odd little bouquet together of things that stuck out of the snow :D 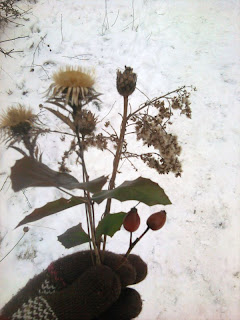 I tried paint by loose brush strokes only, no previous sketch or so. 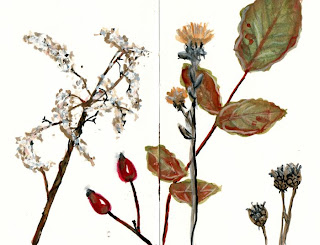 So that was a little selection of what I drew last month. I hope I'll manage to update more often again. :)