So yesterday I had my first session as a scholar in Haider's (that's the artist's name ;)) studio. My task that time was to do an exercise on perspective drawing, also because he wanted to get an idea of my skills. He assigned me a working place and put a stool in front of me. I had been theoretically introduced and then I was supposed to draw that stool in correct perpective. Without any kind of ruler o_o I felt really helpless at first, not being allowed to use a set square or something! Furthermore, I had to bring a sketchbook of at least A3 size (papers smaller than that are stamps to Haider, haha..) and that's strange for me, too. I'm totally used to working with smaller formats, huge blank pages like that intimidate me. ^^'

But after a while, I became acquainted with it. Haider was minding his own work most of the time, but came to my desk every now and then to see how it was going and to give feedback. He's really cool actually ;) He said that I had already made a good impression in the beginning, wearing a Star Wars shirt. :D So we were talking about Star Wars, Batman, the current Avengers film and so on. He even has some action figures alongside with those boring wood dummies for drawing studies. :D

In the end, I received some general feedback on the stool study and some tips and homework for the next time (like practising to draw straight lines without ruler^^'). I'll be there again next Tuesday and I'm really looking forward to that. I feel like those three hours already helped me to improve a lot. 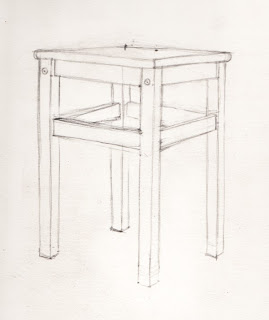