In another sketchbook scan session I stumbled upon this page from three weeks ago. I actually wanted to share it then, but I forgot. Here you are :D 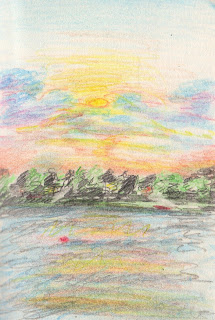 That was shortly after I bought that set of coloured pencils. I spent the day at our cabin with some friends. We went swimming and the sunset was so pretty, I had to try a little picture. My boyfriend also created a Haiku to go with it, but I want to keep it to myslelf. ^^' In the evening there was a festival by the lake, we had grilled fish and listened to some music. It was great!

Since then I was pretty busy with work and moving and everything. And last week, I suddenly fell ill. Like really ill, with fever and everything D: My boyfriend even had to carry me to the toilet on the first days, I could hardly move by myself. I'm a little better now, but the fever just won't go down completely. And to top that off, I also have some infection on my thumb that really hurts...
There's a hundred things I'd like to do right now, but I can't, because I still feel weak.
Yesterday I at least sat down to finally do that Kiriban picture. It's the winner's original character, Karyen: 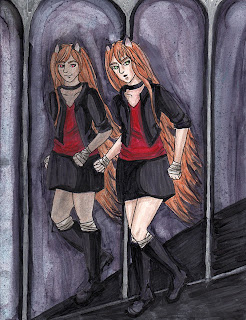 Drawing this was pretty frustrating.~~ Because of the pain in my thumb, it was hard to draw accurately. I hope it will heal soon, that's pretty annoying. :( I just hope the girl is going to like it anyway!
Posted by Katrin at 00:54