Oh well, I'm so behind with blogging again, sorry. ^^' I'm trying to squeeze as many fun events as possible in between my work shifts at the moment. Just one more month until I go to Salzburg, so I'm trying to spend lots of time with my friends here before I'm gone. ♥

Among yummy dinners and awesome concerts, there was one magical evening I've wanted to tell you about! Recently I've been regularly exchanging messages with Anja again. Remember Anja, my committed writer-friend? :) We did some collabs in the past! Well, I was browsing through the next assignments in Drawing Lab, when I saw that the coffee shop one was coming up, which simply is about making yourself comfortable at a coffee shop and secretly ogle all the people there to immortalise them in your sketchbook. ;) So I invited her in for corporate stalking, and we met up at a Starbucks shop, armed with our sketch- and notebooks. I was happy to see her again after quite a while, and she even brought homemade cupcakes! ♥
Oddly enough, there were only really few people there for a Saturday evening. Whether we scared them away with our manic laughter, or they all went to some party we weren't told about, I do not know, but soon we were all on our own. I only managed to fill a single page with a very quick sketch (featuring typical stuff I unconsciously scribble while talking on the right): 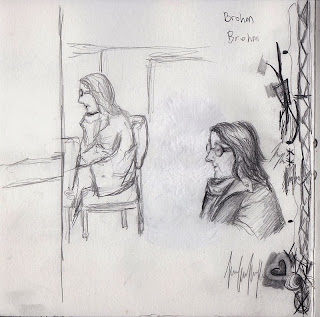 It was getting late, and the Starbucks shop closed. So we tried to find a new location, but then ended up at the food area of a big train station, where we spent the rest of the evening (until the station closed, too, haha...) As I lacked unsuspecting, nearby victims, I asked Anja to be my model. I decided to combine several Drawing Labs. :D These sketches are both wrong-handed and blind contour drawings. I changed my position several times to draw her from different angles, while Anja was writing into her notebook. 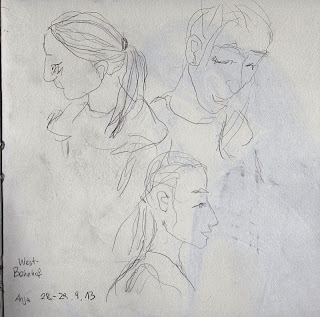 After that, I decided to dabble in some realism. That's totally not my cup of tea, but tried. And I think it turned out quite okay. :) 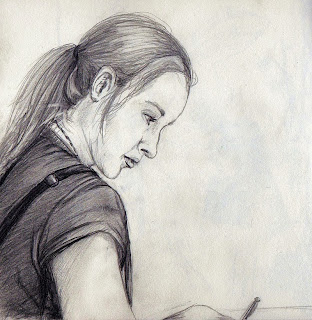 That also was a good exercise in staying calm and confident while drawing in public. A train station staff guy noticed us sitting there for a while already, so he came over to check on us. And when he saw my drawing, he just lingered behind me to watch, asking questions and commenting now and then. It did bother me a little at first, but then I really learned to focus on the drawing process only (to my own surprise! My first impulse would rather be to slam shut my sketchbook). And he wasn't that creepy sort of guy, just curious about what I'm doing there. Which was actually a little bit flattering.

Overall, I can hardly express how inspiring that evening was! Talking to Anja led me to so many ideas and plans. I hope we'll have more of these sessions in the future.

Being all brave now regarding drawing in front of others, I even dared to take out my sketchbook in front of my co-worker on a weekend-shift with nothing else to do. We still had these little flower arrangements left from some event, so I drew one of them, trying to mix the right colours by layering with the few pencils I got: 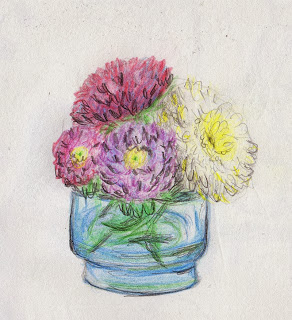 ﻿
I even let her flip through the pages a bit. Really, I think I'm slowly getting a little more self-conscious about my drawings. ^_^

Other than that, I'm suffering from food poisoning. :( It started two days ago, and I don't know what the trigger was, but since that just the smell of food makes me sick. I had to cancel all my plans. I need to get better soon, the Innocent World Tea Party is this weekend after all!

Talking about the Tea Party, I donated prices for the contests/raffle. But I want to keep them a surprise, just in case anyone attending happens to stumble upon this blog.

Being all busy even kept me from playing with my new treasure... 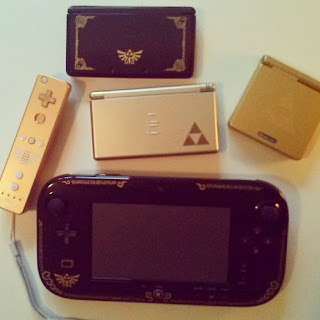 My Zelda edition Wii U, (the gamepad becoming acquainted with the rest of my Zelda edition collection here, hehe) including Wind Waker HD. I guess I won't get to play it until next week, but anticipation is the greatest pleasure. :3