Hi everyone!
Gah, I was trying to write a proper update, but things are piling up, it would have gotten longer and longer, and then I always lose track of everything.

So instead, I'll divide everything in little bits of information. :D I guess that's easier for you readers as well.

A while ago, Anja and me had another collaboration. She wrote a zombie story that's a little different from what you'd expect, and I did an illustration. (That probably isn't exactly what you'd expect from me, either. xD) I tried something else that time, using rough strokes and messy colouring, and just pencil for outlines to create a blurry nightmare-like atmosphere. 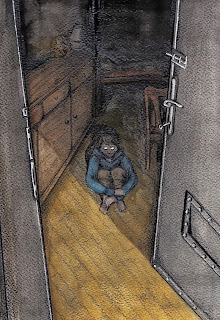 I couldn't post this anywhere before the editorial deadline of the magazine we did it for. In the end, it didn't get published again. I just wish they would write you a few lines about why they've declined your work. But thinking about it now, I think I know the reason. (We somewhat missed the topic by not pickung up the classic zombie image, and that's what they were looking for.)

Anja will try to submit the story somewhere else in the future, but I think it's alright to at least upload the picture here in my blog.

I like how working together with others makes me try something different everytime. :)