I spent the night with some of my friends and had a lot of fun. Unforunately winter break is coming to an end now though. So in a few days I will be back in Salzburg, and then on Monday I'll also have an exam right away >_>

Anyway, 2013 is gone and so I really want to get done with these retrospective posts and focus on the present again. There are just two more things I'd like to write about, and since my current sketchbook is almost full, I think I'll probably just make a summary post then with my favourite sketches where I can show you anything else I find good enough to share. :) I also filled out one of these Art Summary Memes for 2013, so that would make a good year-end closing post.

One of the 2013 things I still want to write about in a separate post is my last Birthday. It was in November already, but since there were some art-related things going on that day, I'd like to tell you about it!

I had just moved to Salzburg then, not knowing anyone there yet. And I knew that my boyfriend wouldn't have time to come visit me, so I thought I'd just spend the evening in bed with a book and a package of cookies. But theeeen my art-friend Tanja said she'd come from Munich especially to see me! *_* We only had about three hours together, because I had to be at the library until 4pm, and she had to catch her train back in the evening, but I enjoyed every minute. It had been so long since I met her last time.

We took a stroll through Salzburg's old town, visited some shops (Sonnentor! ♥) and had dinner together. I had the chance to browse through her sketchbook, and it was both really inspiring and intimidating at the same time. ^^' She's been to art uni und works as an illustrator, so she's some steps ahead of me. :'D But she gave me some tipps and it was really fun to chat. Both of us drew a little, but somehow I got stuck, so there's more words than drawings (the intimidation, probably..) 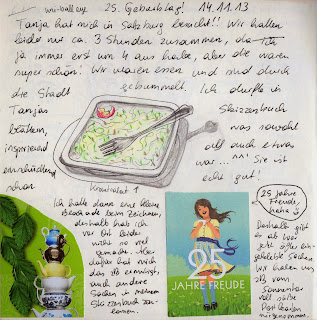 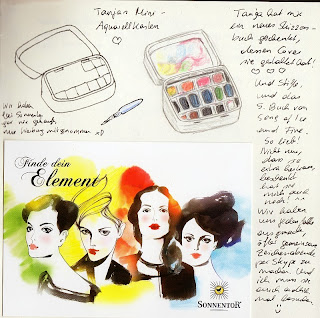 Not only did she come from another country to see me (being 7 months pregnant and all), she even gave me some presents! Look at that sketchbook I got, she designed a cover featuring her and me!! ♥ I love it so much. And some drawing pens, and a book! :)

Later I saw that she also uploaded her sketchbook page from that day :) :

I was really sad when our time together was up. And then I also had a little fight with my boyfriend on the telephone. :L
Walking home afterwards I felt soo lonely, so I just went to sleep right away.

But the next morning I turned on my computer, and then I saw how many people thought of me that day and sent me emails and all! ;_; That really warmed my heart!

Look at this adorable card from Nini! :D 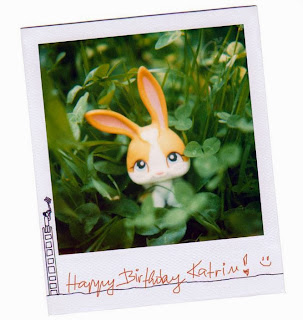 And Dora from Garden of Imagination even drew something for me! It's her and me in our outfits from the Innocent World Tea Party, where we got to know each other the month before. ♥♥♥ 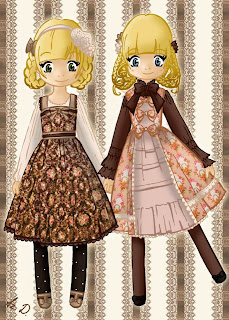 The next weekend I went to Vienna to see my boyfriend again. My family had already given me a bag for my Birthday beforehand when they visited me in Vienna in October, so I opened it up then. :) That's what I got: 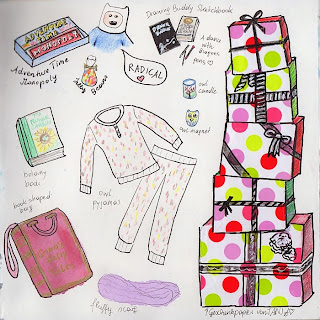 Something else Tanja inspired me to do is keeping little photos and stuff in my sketchbook as well. Somehow I always felt that my sketchbook was for drawings only, and I kept keepsakes like tickets and such in a box. But I don't ever open one of these boxes to browse through that junk again. Instead you can use these little things to do little collages in your sketchbook! The present boxes in the image above are cut from the wrapping paper Tanja had used for her gifts. :) Also, when I work with watercolours, the backsides of these pages are often unusable because of the colour leaking through, so these pages are actually perfect for pasting keepsakes, like the one below. :) Basti gave me tickets to see the Puppet Theatre in Schönbrunn performing Mozart's Magic Flute, I've been wanting to see that forever! It was really nice! I planned to draw something, but in the end I just cut out photos from the performance from the info folder. xD 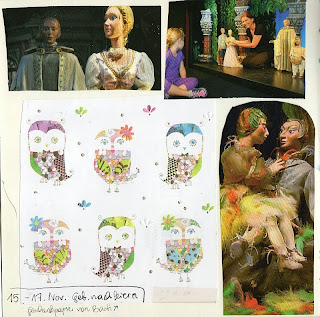