So I finally get to write something about last Christmas. Actually, this was the first time ever I somehow didn't really get into the mood. I love Christmas, and I'm usually looking really forward to it during all advent, but this year my mind seemed to be somewhere else.

The weird weather this year didn't help either. There's hardly been any snow so far! The little there was all melted away again. While I was still in Salzburg, I went to the Christmas market with the library guys sometimes, but only for the tasty food. :D (Mhhh.. Mozartschmarren!)

The only time I felt somewhat christmassy was when another friend honoured me with a visit on the 17th. ♥ Lisa came to see Salzburg with me, she had never been there before, so we did some sightseeing, I showed her the library and stuff, and we tried this really tasty vegan restaurant.

My favourite hours where those spent in the Toy Museum! :) They have really old teddy bears there, and dolls, model trains, board games from different centuries, all sorts of interesting bric-a-brac. I really need to go there again, it's so inspirational! I did some pencil scribbles there and used watercolour on them on the train home in the evening. There was also a special Christmas exhibition room. 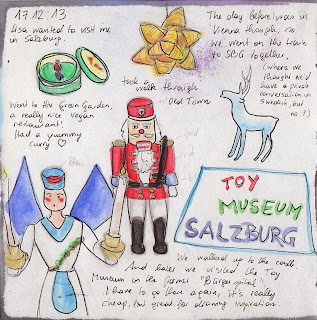 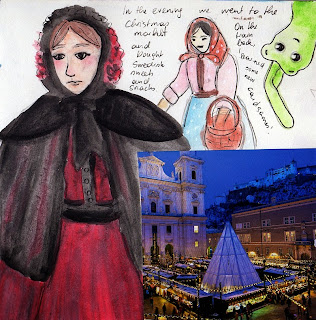 In the evening, we went to the Christmas market and for the first time, the Christmas spirit got me a little, while I was sipping on my cinnamon apple punch and listening to some live music. :)

On the 24th all was a little hectic first.
This year my boyfriend's Mum invited everyone over to their house in Vienna, both my family and theirs from France. Basti went to the airport and collected his relatives, and I met up with mine so we could all meet up at their place in the evening. It was a little confusing with the languages, but I think everyone got along.^^' We had a really good dinner! Raclette with different kinds of meat and vegetables and all. Yummy!

My Santa was reeeaally crazy this year. I got so much o.O Seems like I'd been a good girl. xD 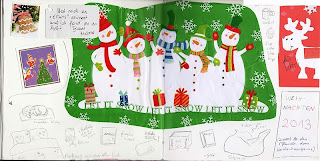 As you can see I'd also been sticking in things into my sketchbook again, like some cuttings from the wrapping paper people used for my presents, or the tags as keepsakes. :) Generally, I think these pages turned out rather boring though, I was just too tired from digesting all that food, haha. 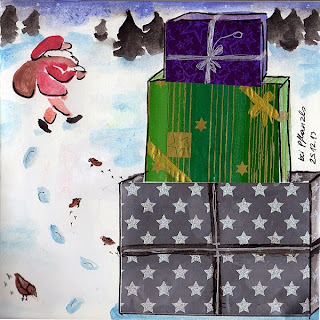 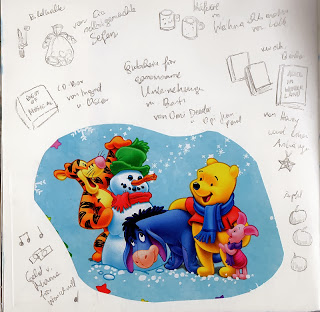 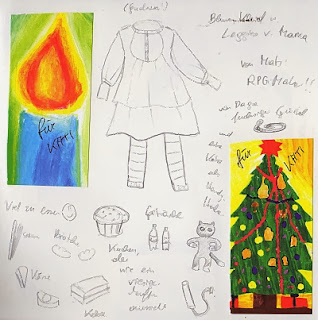 Now look at that, I got a 3DS XL in that special Zelda edition! :O Obviously my boyfriend decadent Santa thought that it's not enough to have the "normal" Zelda 3DS, as a fan you ought to have each of them. I would have never bought the other one too as long as one is still running perfectly, just to own them both. But know I have them. Crazy!! 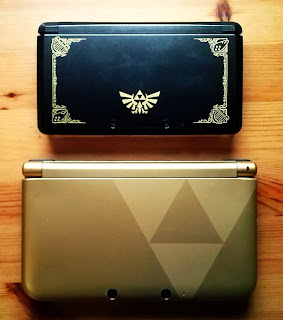 Generally though, I was rather melancholic that night. I had to think of all the souls that used to be with us the years before, of everyone gone now. It was the first Christmas without all of my grandparents, and the first without my dog. :(

There was one present with a tag that said "For Katrin, because it reminded me of 'something'". I really wondered what this could be. So I opened it and inside... there was a little plush dog that totally resembled my dear Vicky when she was a puppy. Even the pillow the plush dog lay on looked like the dog-bed Vicky had (red tartan will always remind me of her)... That moment I couldn't help but burst into tears. It appeared to be a present from my Mum, and when she saw me crying, she came over and hugged me, saying she was really sorry, that she didn't want to make me sad. And then all the others came and put their arms around me as well. And my Mum and brother cried a little as well, and we thought of everyone we lost this year for a moment.

I painted it in my sketchbook the other day. It's really cute. I put it under my night table, because this was were she used to sleep. And when I woke up at night, I always used to bend over from my bed and stretched down to ruffle her fur a little. 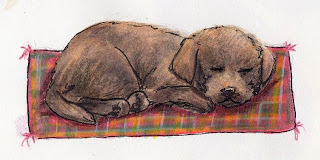 So it was a somewhat sad, but otherwise really pleasant evening.

There are some more things I'd like to show you. Dora and Nini surprised me yet again! :)
One morning the postman brought an envelope from Hungary.. a Christmas present from Dora! First of all, I really wondered how she found out my address. xD But she also wrote a letter (which was folded like an envelope, awesome!^^) where she explained how she asked a friend of mine for it to keep it a surprise. Inside were two beautiful flower hair accessories and a brooch she made herself ♥: 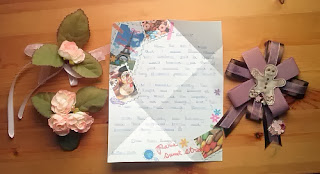 I wore the brooch at Christmas eve :) 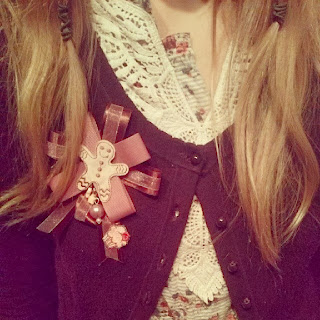 And some days later there was another envelope in my mailbox, from Slovenia this time. Nini sent me a self-designed Christmas and a New Year card! :D She had already shown the clover card on her blog for everyone to print out as motivation for 2014 and I loved it. :) So now I got this shiny print directly from her, that's so much better than my own home-print would have been. It's already hanging on my wall. :) 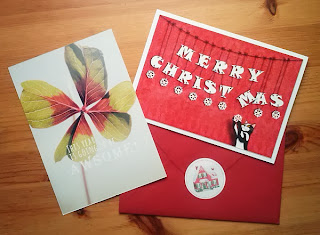 Thanks to both of you, you made me so happy! I really like what you sent me, but just the fact that you two thought of me really moved me!

Even if my family has become kind of small, it's great to know to have friends like that out here. I'm not alone! :) Thank you so much. ♥