Hi everyone and welcome to another blog update, wohoo! ;)

And this one is safe for work, no blood, I promise. :P

I hope you all had a pleasant weekend! I thought I might catch up posting some art stuff I did during the past months, especially Christmas related things that I could not show you before so they'd be surprises.

More than a year ago, during my year in Salzburg, my classmate Lena and me went to the cinema and watched Frozen. It was actually the premiere day! I guess as everyone else who had watched to movie, we were especially enchanted by the "Let it go" - scene and song. We decided to do another art trade, as when we had been watching the Hunger Games movie. Other than that first arttrade, this one would take a while to be completed. :P

I didn't actually forget, I thought about doing my part very often, and I have no explanation for why it didn't happen earlier... I already knew I wanted to do something related to that scene and I listened to the song a lot. Going to a new place by yourself, leaving your old life behind, letting go of the pain, and letting yourself discover what you can do. That really spoke to me! <3 But for some reason it took until Christmas 2014 that I finally sat down and got to it after having re-watched it with my Mum. Lena already received it and her part is apparently on it's way to me. :)

So this is what I painted for her: 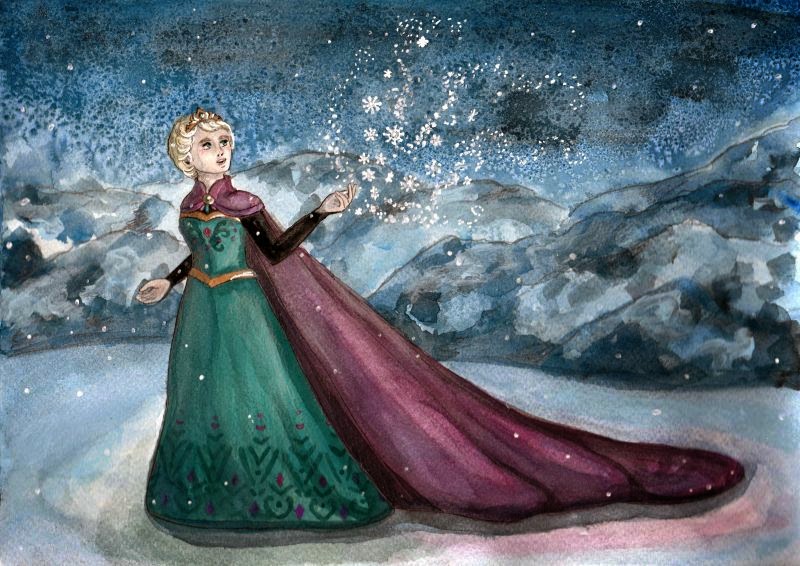 And this time I even remembered taking WIP pictures and I made a gif for you!

I'm sorry that the cropping and lightning differs so much sometimes, but it was only phone pictures and I used the auto colour corrections on everyone. Too lazy to sit and edit everyone of the 13 pictures so that they'd be totally synched...^^' But you go get an idea of the working process!

I still have two more old art trades on my list, but one is almost done, I plan to get to the other soon! :)